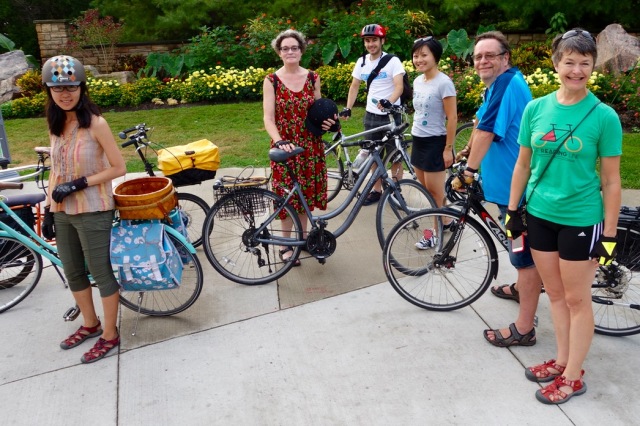 Today was the official opening of the Bloor Bike Lane pilot by the City of Toronto. Prior to the press event, Cycle Toronto organized an informal ride starting from Bickford Park, at the intersection of Grace and Harbord.  A number of us from Wards 13 & 14 got up bright and early this morning to bike in from High Park. 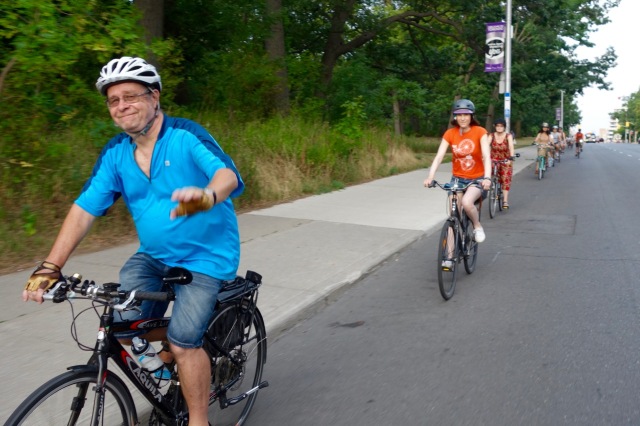 including all these friends from Ward 14

and Amanda and Janet Joy of the Reading Line. 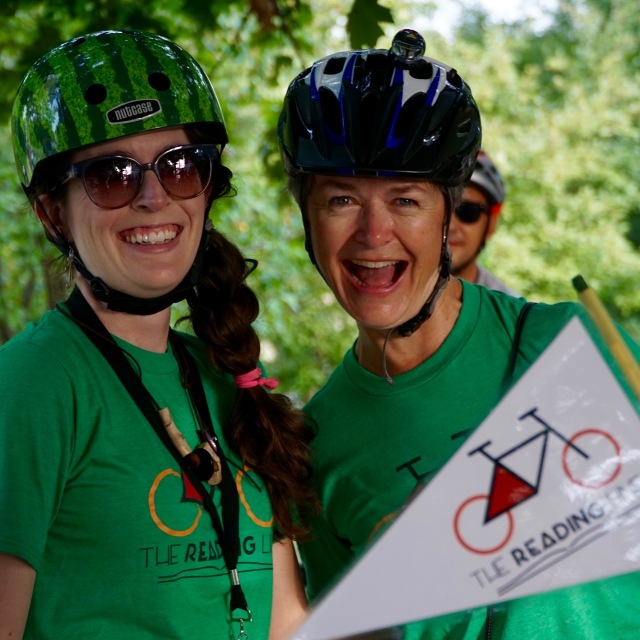 Local councillor Mike Layton warms us up, saying that bike lanes on Bloor have been a long time coming. 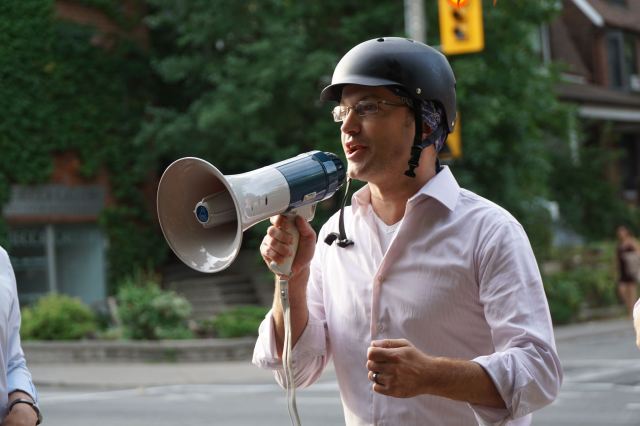 BTW here is the custom headbadge on his sweet ride.

Mike, joined by Jared Kolb and councillor Joe Cressy, all took turns commenting on how this project was the result of many years of advocacy by various groups, as well as cyclists across the city. It should be noted that today is also the birthday of the late Tooker Gomberg, who was one of those voices called for bike lanes on Bloor more than 40 years ago. 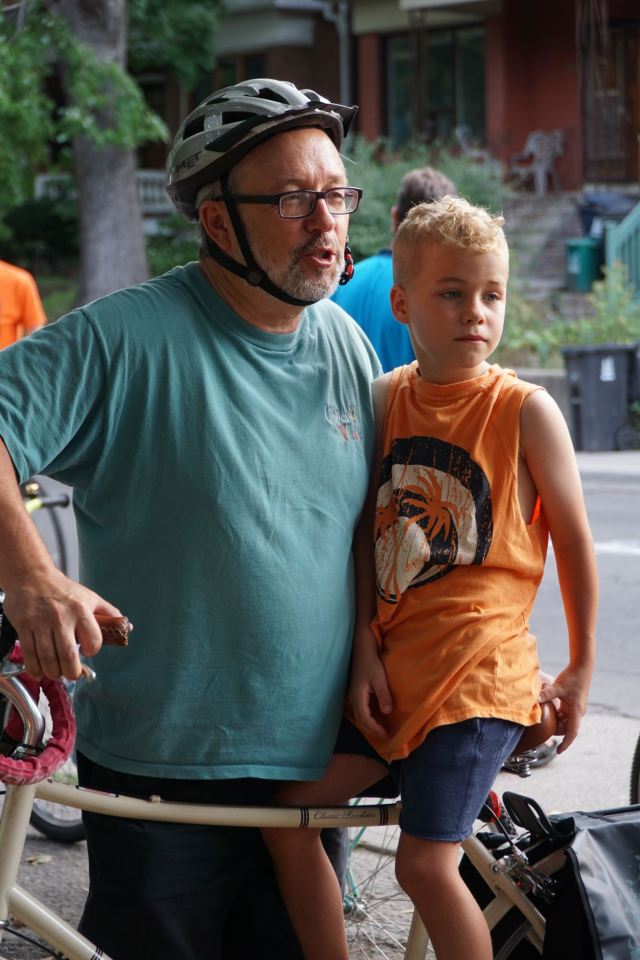 And then it was time to ride, with Jared, Joe and Mike in the lead. 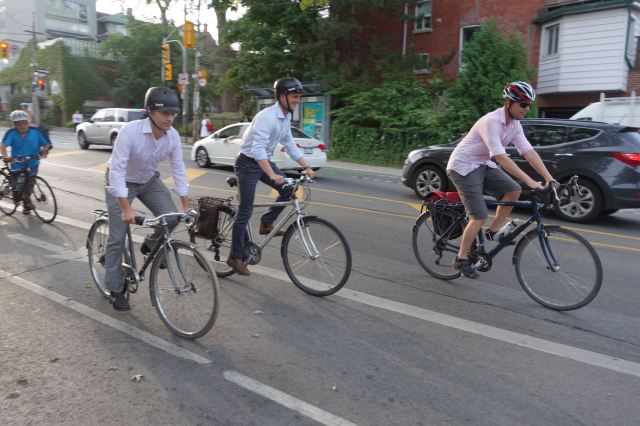 Here we go down Harbord.

Up Shaw, and then back east on the new bike lanes. 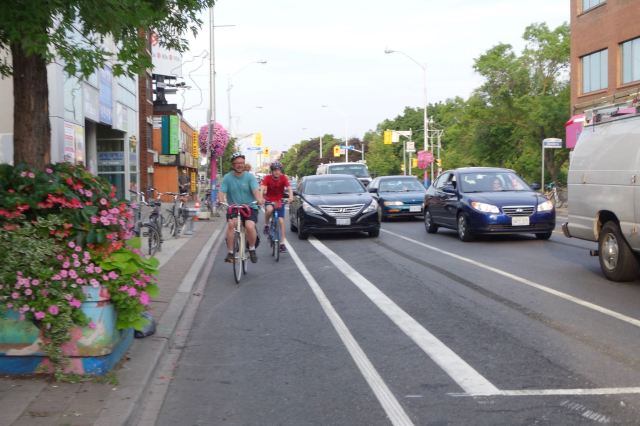 The press event was at Bloor and Lippincott, and there was good turn out of interested cyclists, as well as people from the neighbourhood.

The media was also present.

Ashely Curtis, Acting Deputy General Manager of Transportation Services, got things started. He said that while this project is a real breakthrough, he counselled patience in that the project is only 80% done, and that it will take some time for drivers and cyclists to adjust to this new infrastructure. He also mentioned several partnerships involved in taking and analyzing data to assess the success of this project. 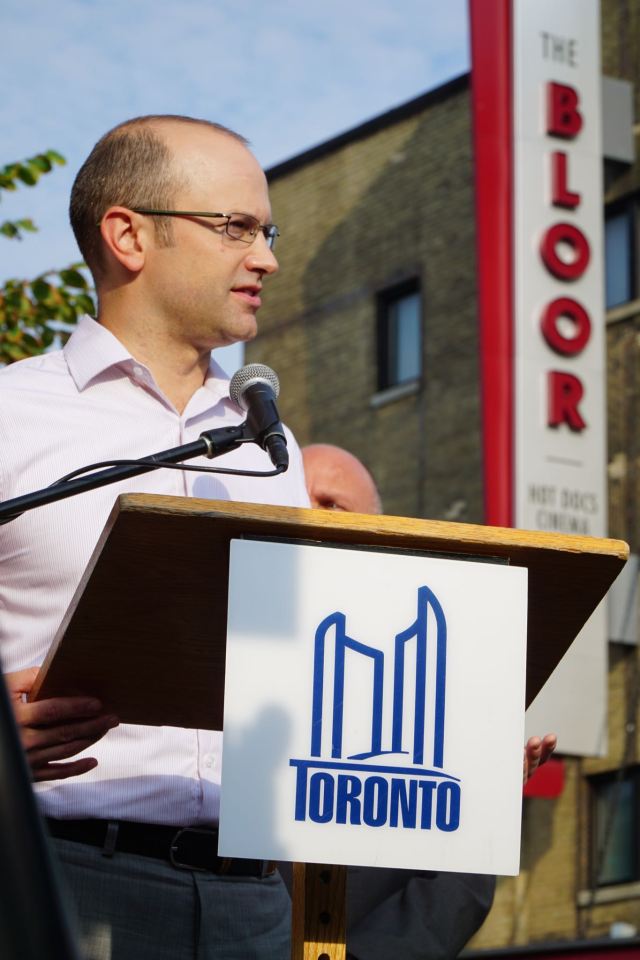 Joe Cressy led off by saying that he still lives on Albany. He thanked the many groups that advocated for bike lanes over the decades, including Cycle Toronto and Bells on Bloor, and emphasized that the decision on whether the bike lanes are a success will be data driven. He stated that this will be the most studied cycling project that the City of Toronto has ever done.

The atmosphere was upbeat and optimistic, and many people hung around afterwards to chat.

Albert Koehl said that he hasn’t stopped smiling since the beginning of the installation. 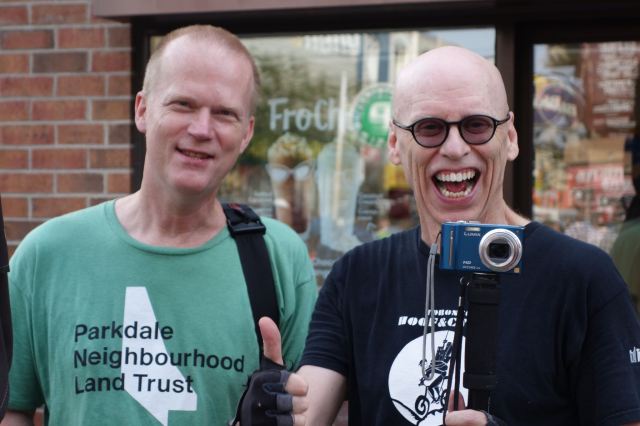 All smiles at Cycle Toronto as well  (from left to right, Keagan, Jared and Mark). 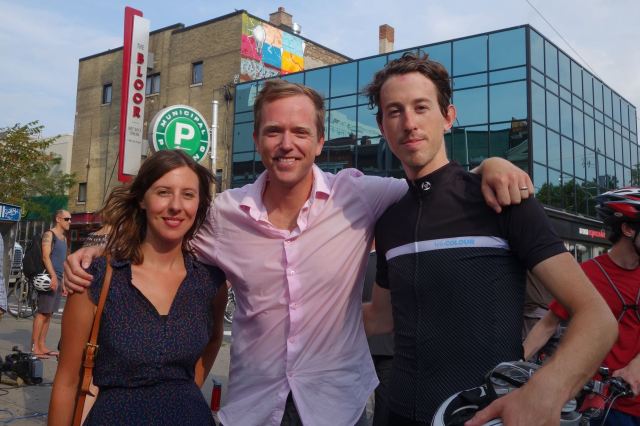 We look forward to the completion of the project, the full year that we get to use it, and City Council’s eventual decisions to make the bike lanes permanent, and to eventually extend them both east and west, thus fulfilling the vision of Tooker Gomberg.

A slightly shorter version of this post appears on the Dandyhorse Magazine Blog.

Comment from Angela Bischoff:
Correction: Tooker didn’t call for bike lanes on Bloor 40 years ago though other cyclists did. Tooker was a great cycling advocate. After his passing in 2004, friends of his got together and formed Take the Tooker as a legacy project, calling for bike lanes along Bloor/Danforth. It was such a sweet coincidence that the official opening of the lane happened on his birthday.