Tonight was Westward Ho!, a community meeting organized for the Bloordale neighbourhood to educate people about the issues surrounding a possible westward extension of the Bloor bike lane as far as High Park. It was organized by frequent Dandyhorse contributors Albert Koehl of Bells on Bloor and Rob Zaichkowski from Cycle Toronto. The meeting was held at Bloor Collegiate Institute, just a bit west of the Bloor and Dufferin intersection.

Albert kicked things off with a short historical presentation of bike lanes on Bloor.

Next up: Nancy Lea Smith from TCAT, who talked about several studies they had done over the years to measure the economic impact of bike lane installation. 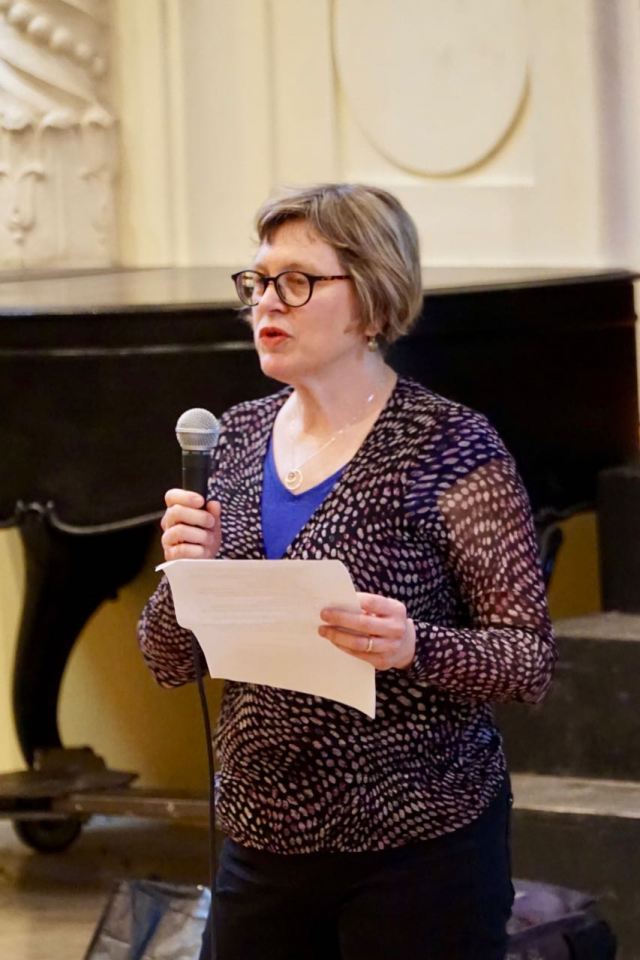 The next speaker was local merchant Jennifer Klein of “Secrets From Your Sister“. She has been supportive of the bike lanes, but understood the apprehension of some of her fellow merchants, as well as her own customers. She said that adjustments made during the pilot phase of the Bloor bike lanes was helpful: in particular the addition of dedicated loading zones on side streets.

Sharon Zikman (Doctors for Safe Cycling) talked about the health aspects of cycling. She is a psychiatrist, and made an analogy between anti-depressants and commuting by bike. She said that when she prescibed anti-depressants, she knew upfront that the they would be 35% effective on average, with some small probability of serious side effects. On the other hand, she cited studies from the UK that benefits from commuting by bike could have a larger impact, such as a 50% decrease in cardiac disease. She noted the hazards of cycling as a side effect, but this was a side effect that could be avoided by prescribing safer cycling infrastructure.

Next up: Nahum Mann from the Bloordale Community Improvement Association (CIA). He said that they were supportive of the westward extension of the bike lanes. On a personal note, he said that he both he and his fiancée had been doored recently. 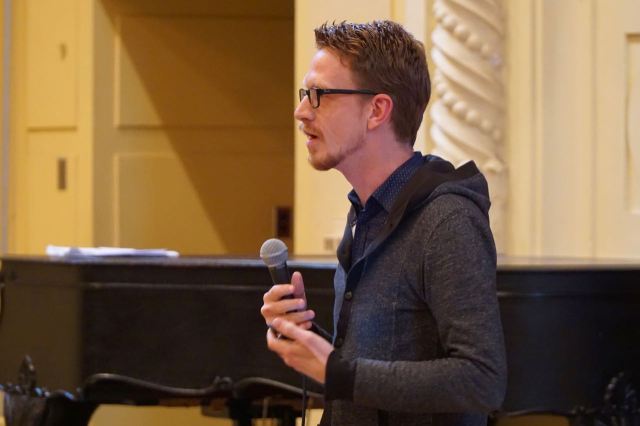 At this point, Councillors Layton and Bailao joined in, just having rushed over from City Council after having voted to make the King Street transit pilot permanent.

Mike was somewhat circumspect about the prospects of the westward extension in the near term. He spoke from his experience in the long process of getting the Bloor bike lanes installed up to Shaw. He said that it took a big tent to get it through. At the same time, one can’t wait for the community building to be perfect before moving forward.

Ana Bailao sounded generally supportive. She acknowledged that a network of bike lanes will be one piece of the solution to moving goods and people across an increasingly crowded city. She said that there will be a need for difficult conversations, and that support comes from packing rooms with people, not just dedicated cycles. 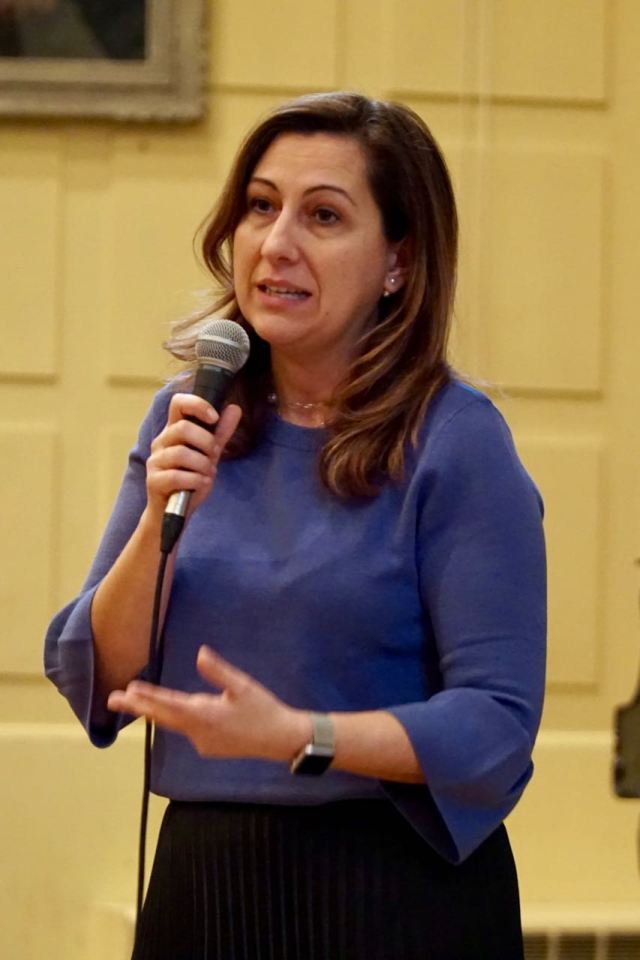 Next, Gideon Forman from the David Suzuki Foundation presented some data from an EKOS poll that showed surprisingly broad support across the city for bike lanes. 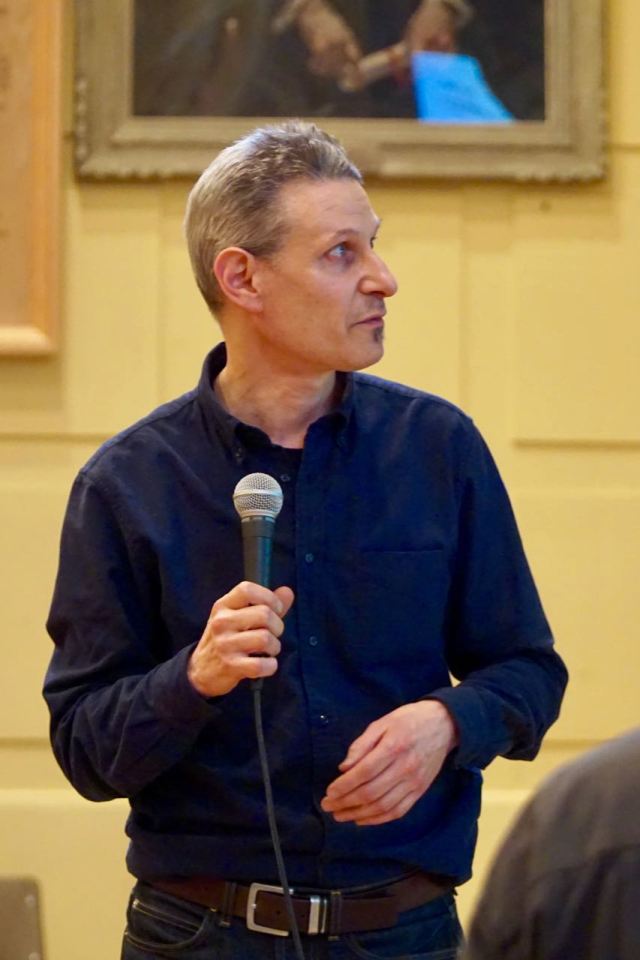 Finally, Jared Kolb from Cycle Toronto said that City Council will have a key decision to make in May to consider accelerating the extension of the Bloor bike lanes. If they turn it down, there is little prospect of anything happening until at least 2023. He reiterated the success of the Richmond/Adelaide bike lanes, and stated that their polls consistently show that people want to ride, and they want to ride more often. 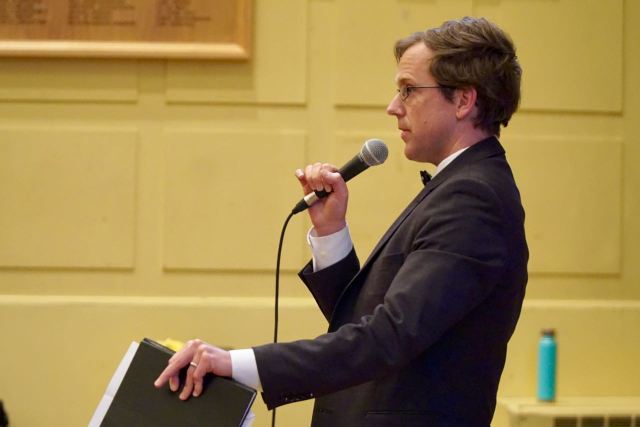 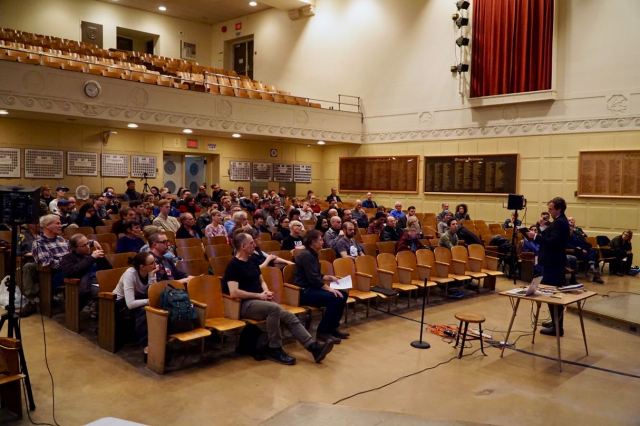 The speakers then took a series of questions from the audience. 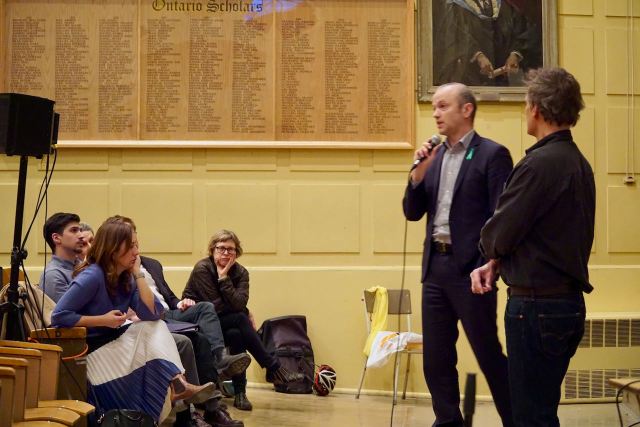 There were a few people who were brave enough to speak up strongly against the bike lanes, and against the behaviour of cyclists in general. This lead to one of the difficult conversations that was alluded to earlier in the evening.

One of the last questions was from the head of the local BIA who said that her members were undecided about the bike lanes, and that they were not aware of the information that had been presented at this meeting. I saw both Jared and Ana huddled with her as the meeting adjourned.

Out in the lobby, there were a few researchers from the University of Copenhagen who were running a survey on bike infrastructure. They are been here for a while. Here, longtime advocate Hamish Wilson is briefing them. 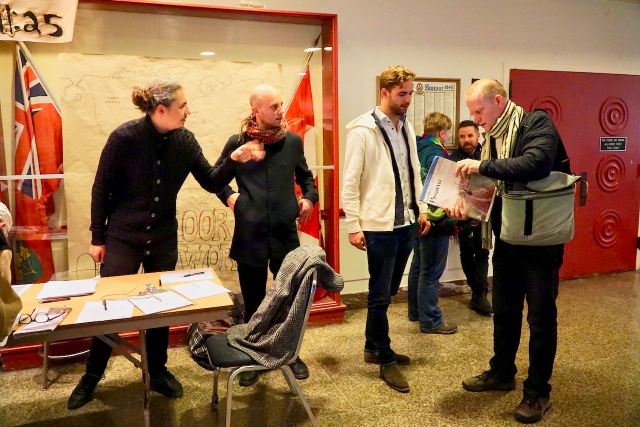 One of the european visitors said he was impressed with all of the bike advocacy that was going on, but couldn’t understand the glacial pace of getting new things built.  Why indeed….