This past Saturday was the annual Bells on Danforth ride, the sister ride to Bells on Bloor. It was also a day to remind ourselves about the joy of cycling, after a brutal week when four cyclists died in the GTA.

Bells on Bloor organized a small ride to the ride starting from Bloor and Spadina. 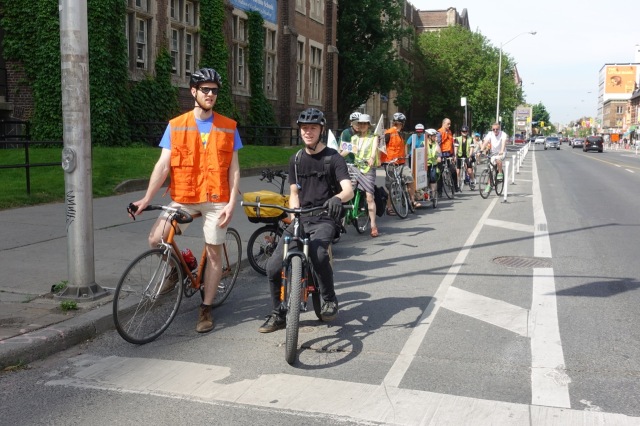 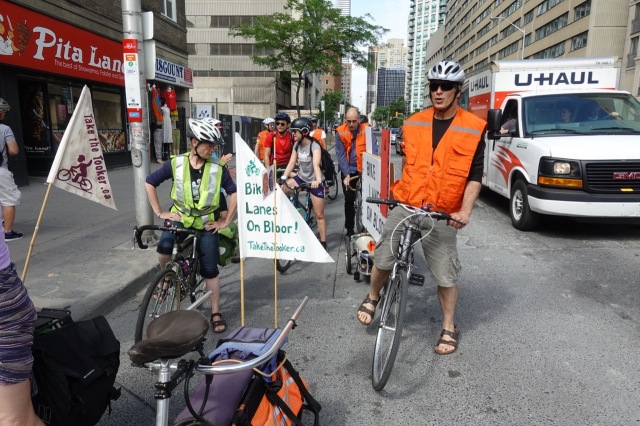 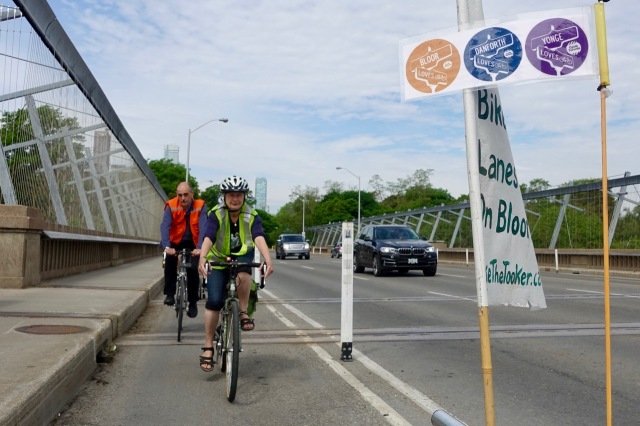 A brief detour south as a portion of the Danforth was closed off at Broadview for a street fair.

The ride starts at Withrow Park.  Here is a panorama of the hundreds of cyclists gathered for the ride.

Tom is our emcee today. 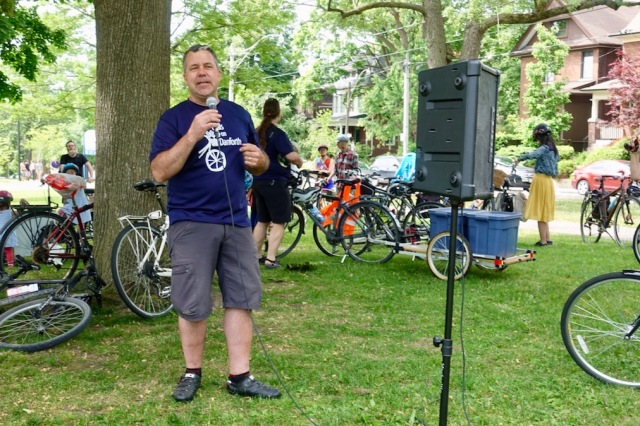 Liz from CycleTO and Janet Joy from the Reading Line.

First speaker was Peter Tabuns, newly reelected MPP. He read out the acknowledgment of lands, and then apologized for not being free to ride with us.

Next: Janet Joy Wilson talked about the upcoming book ride on August 26 that is themed around the Prince Edward Viaduct. She was raffling off a signed copy of “In the Skin of a Lion”. 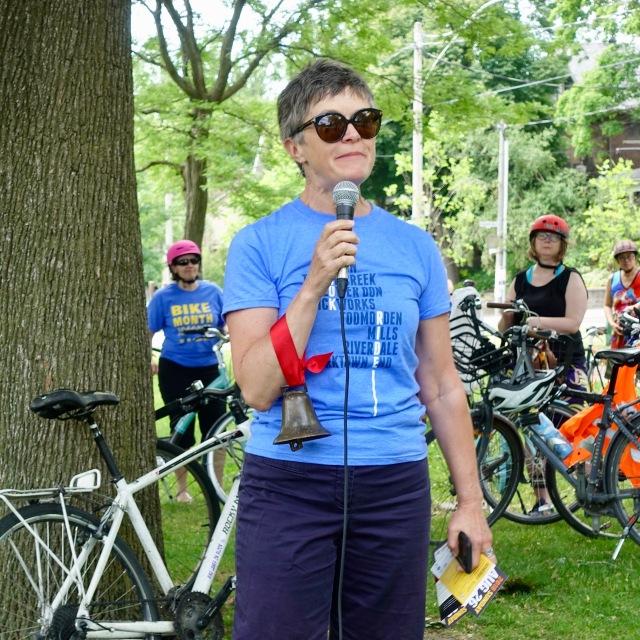 As Bells on Danforth is a non partisan community organization, they did not allow anyone who is running for office to speak. However, Mary-Margaret McMahon is not in that category as she will be stepping down in the fall due to a self imposed two term limit. She talked about how she will continue to press for better bike infrastructure, partially through her efforts on PWIC. 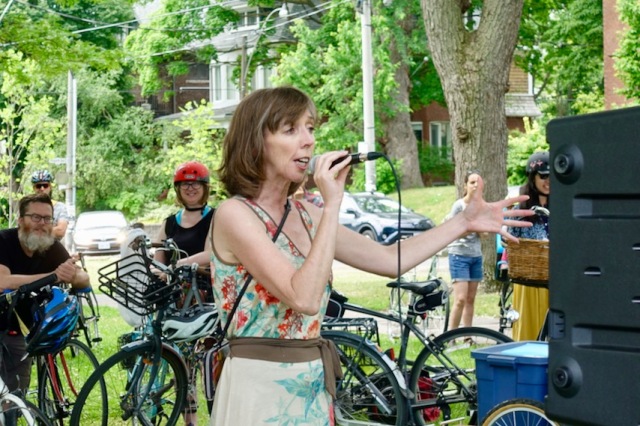 Janet Davis announced just this week that she is also not running this fall. With the loss of her and Mary-Margaret, we have lost two strong proponents of cycling, and the two champions of the Woodbine bike lanes. She said that she and MM will continue to press for a corridor study to be started before the election as part of a continuing push for bike lanes on the Danforth. She reminded us that not only should we be talking our local councillors; we should also be putting pressure on the mayor’s office. 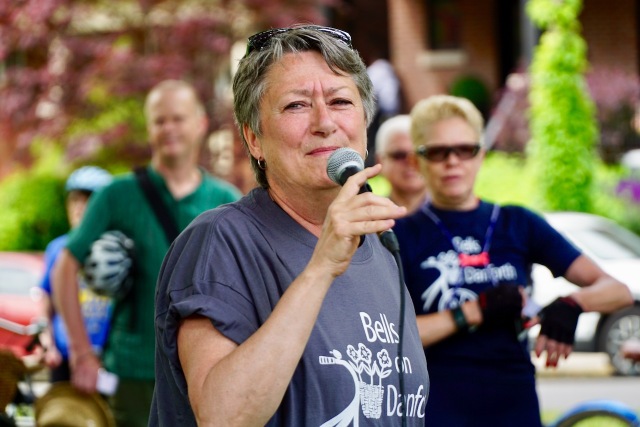 Liz Sutherland announced CycleTO’s new campaign: #BuildTheGrid, which is an update of the “minimum grid” campaign.

Just before the ride, the draw for the book was done.

Regrettably I did not get the name of our happy winner. 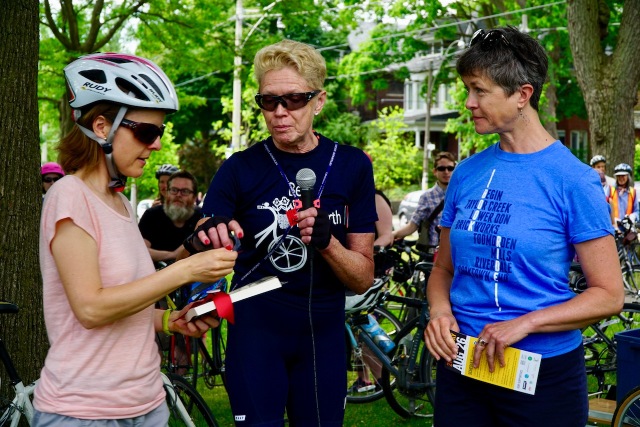 One thing that was noticeable to me was the large number of families with kids, many more that I have ever seen on the Bells on Bloor rides. Here is the most elaborate kid bike set up I saw today.

Now time to line up on Logan.

Our leaders head off with the banner. 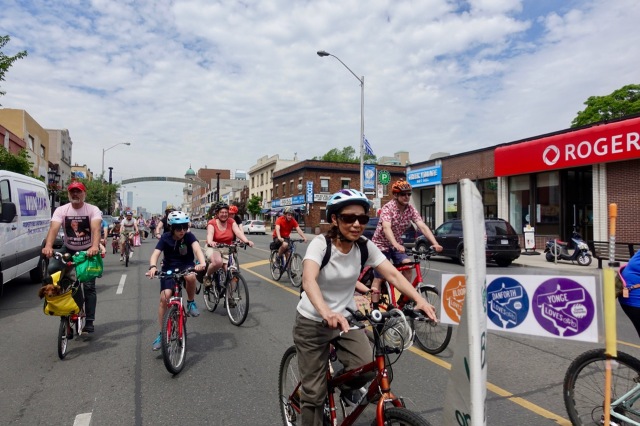 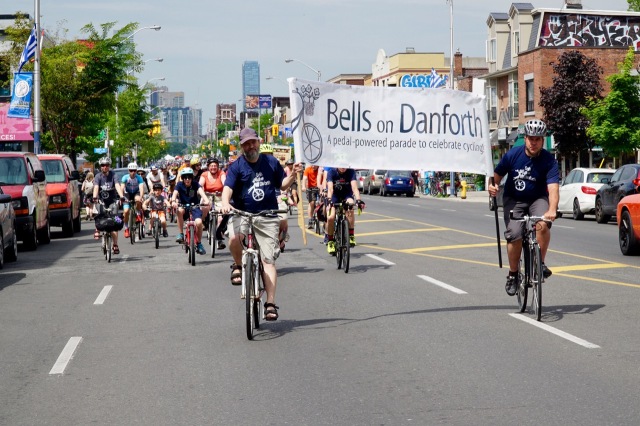 Our own Albert Koehl.

I was impressed that Danielle’s friend could ride slowly enough in full aero tuck position. 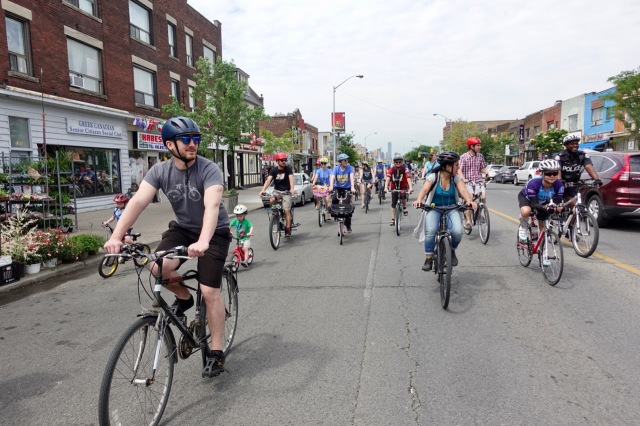 Jess Spieker from Friends and Families for Safe Streets.

Martin de la Rue waves to the crowd as he corks a side street. 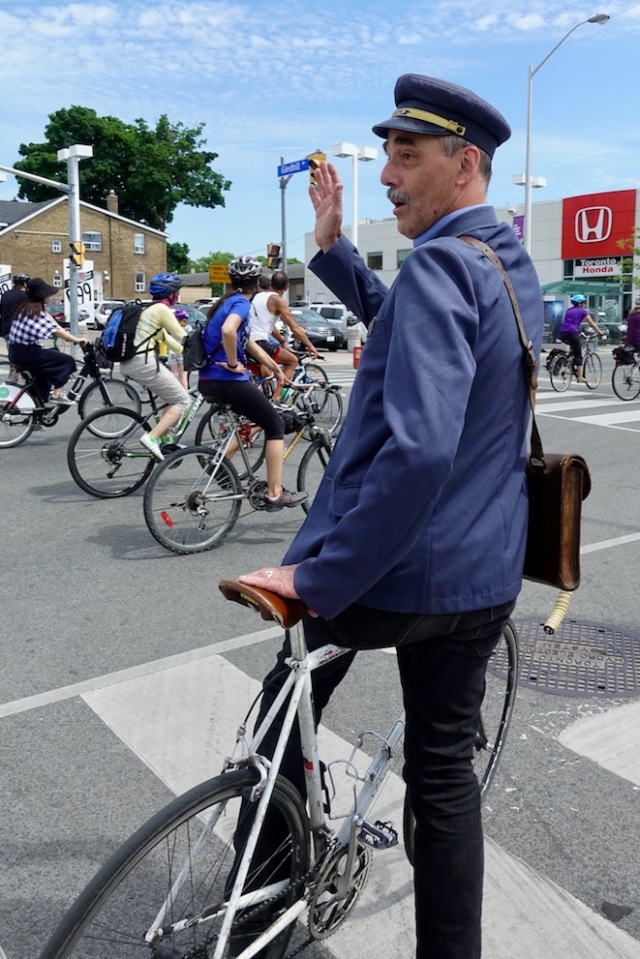 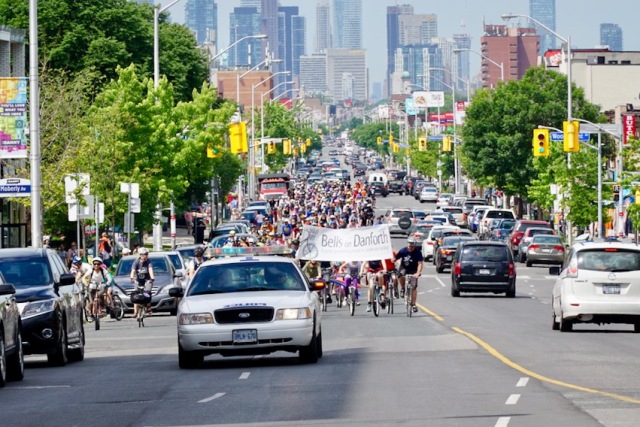 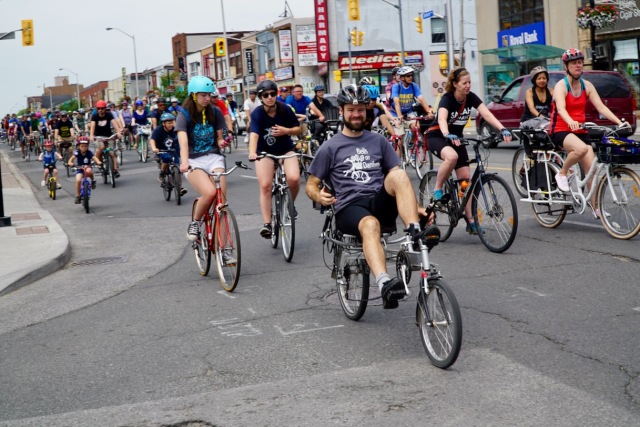 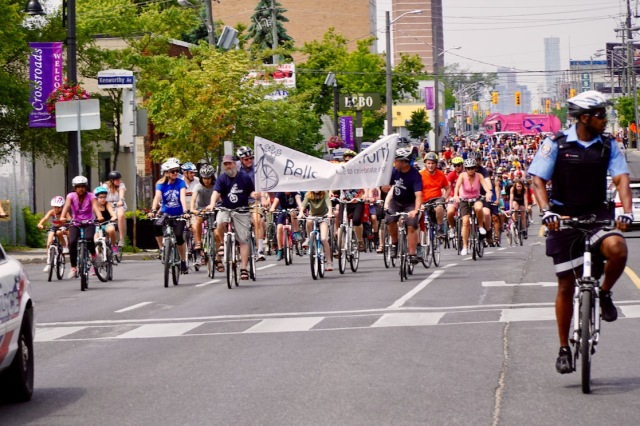 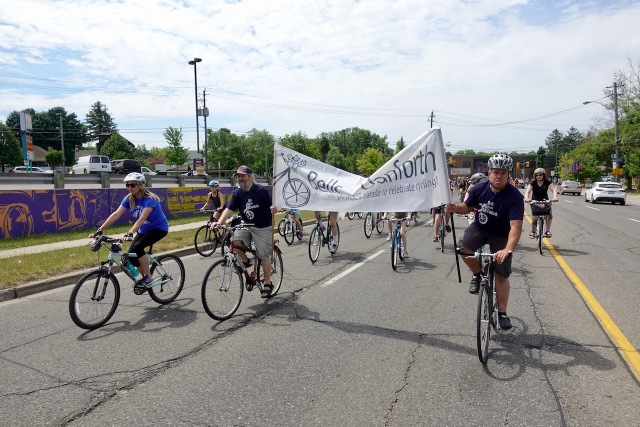 Arriving at the Oakridge CRC. 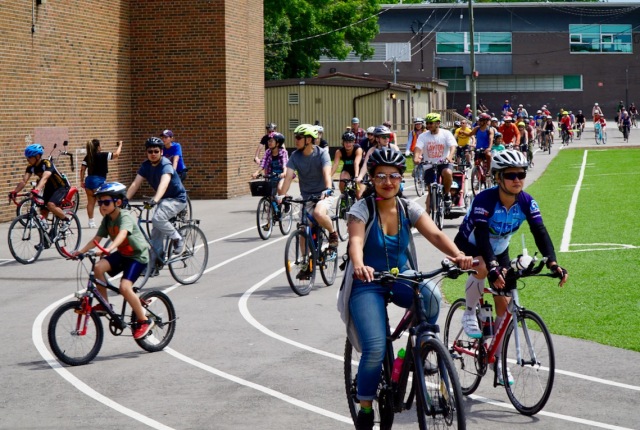 Janet Joy with Sarah Climenhaga who is running for Mayor. She is fully engaged on active transportation issues.

Scarborough Cycles and the Ward 32 group.

Some fellow Bells on Bloor members.

One last reminder about the new campaign. I forgot to ask CycleTO to smile.

Here is my brief video of the front half of the rider pack.

and here is some drone footage of the start.

Overall, a perfect day for a bike ride, with lots of families present. Starting and finishing at Community Centres was a smart idea. Thanks to all the organizers for a wonderful event.

The hope is that with the continued success of the Bells on Danforth event, we can keep up the pressure to get bike lanes on the Danforth, to accompany the bike lanes on Woodbine. 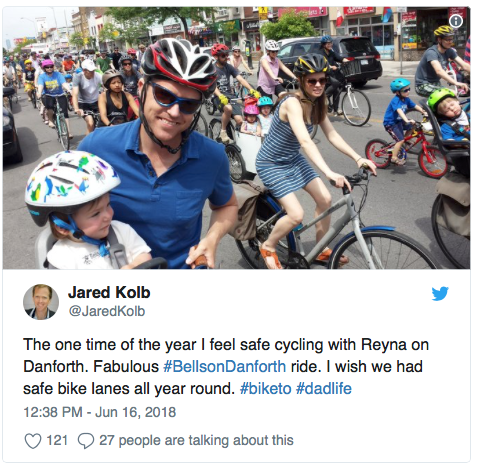