Today was the latest in a series of public consultations about the Bloor bike lane pilot. 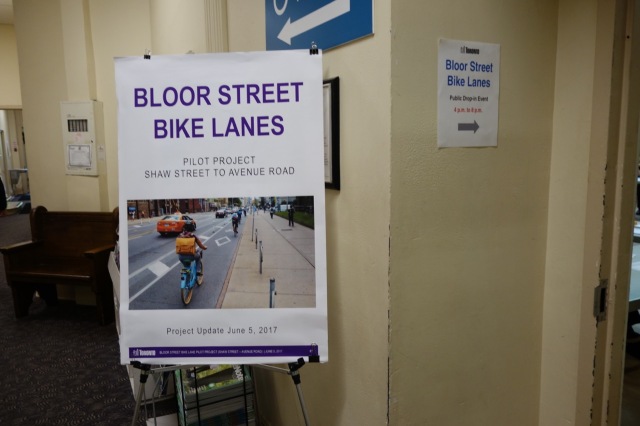 It was an opportunity for the city to present some of the latest results from a survey. This Toronto Star article summarizes the main points, with the somewhat hopeful title “Bloor St. bike lanes find strong support from residents”.  The strongest support comes from area residents, and not surprisingly, the strongest opposition comes from people who just drive through the neighbourhood.  This brings up the perpetual question of whose wants and needs should take priority.

The event was well attended. However, I didn’t feel much of a buzz in the room, unlike earlier meetings.

As per usual, there were detailed maps laid out on long tables where people could leave comments about specific locations.

The bearded fellow in the blazer is Shawn Dillon, the new Manager, Cycling Infrastructure & Programs (acting).  Apparently Jacquelyn Hayward-Gulati was promoted out of her position.

Some detailed changes to the bike lanes were described. The most significant were a retiming of traffic lights to cut down on delays, and the creation of some loading zones on side streets to address some merchant concerns. These changes were done in the past week. More traffic data will be taken in the month of June and will be incorporated into the final report that will go to council for the fall.

The materials presented at this meeting are available here.

Thanks Albert, appreciate the note.

I’m still very close to the Bloor file, as I expect there is lots of work to come on that!!