Posted on August 7, 2016 by bellsonbloor

The first week has gone by with the installation of the Bloor bike lane pilot. The basic lane markings went in very quickly, and people have had about four days to try them out. There has been a lot of chatter on social media which shows the high profile for this piece of bike infrastructure.

There were a couple of reports of cyclists wiping out because of excess glass microsphere left on the roadway. These microspheres are applied after the paint goes down to make the markings reflective at night. However, it is a dry powder and anything that doesn’t get embedded in the paint can blow around. Here is a picture taken on Thursday, just east of Shaw, and you can see excess material that looks like a light dusting of snow.

After the city was made aware of this issue, there were several passes at sweeping the material off the road. Here’s a picture taken Saturday around 5 pm, and you can still see a line of dust left behind by the sweeping.

At this point, a couple of people volunteered to do a sweep of the bike lanes. Albert Koehl started at 8 am, working his way west from Howland. Wayne and I joined him at 8:30 at Christie Pits. Shortly after this picture, we were also joined by Dave.

Sunday morning, it was already clear that more sweeping had been done overnight, since the lanes were clearer than yesterday. Nevertheless, we saw that there were a few spots to be touched up.

Wayne and Albert sweeping. Note the rainbow halo from the glass.

In particular, there were many places where the material had been swept or blown onto the sidewalk, which created a particular hazard at crosswalks. In the foreground of this picture, you can see an accumulation of glass just at the edge of the ramped sidewalk. This would be a hazard for pedestrians.

Not only were we getting rid of the glass, we also swept up broken glass, cigarette butts, and other debris. 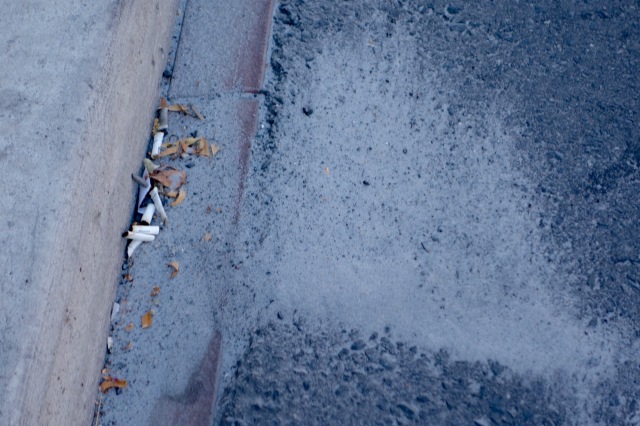 We would either use a dustpan and put this stuff in a trash can, or we would sweep it down a sewer grate. For the record, we would pick out the trash and butts before the dust went down the drain.

Now working our way back east, and Albert is waving at Andy and Elise who just arrived to help out. 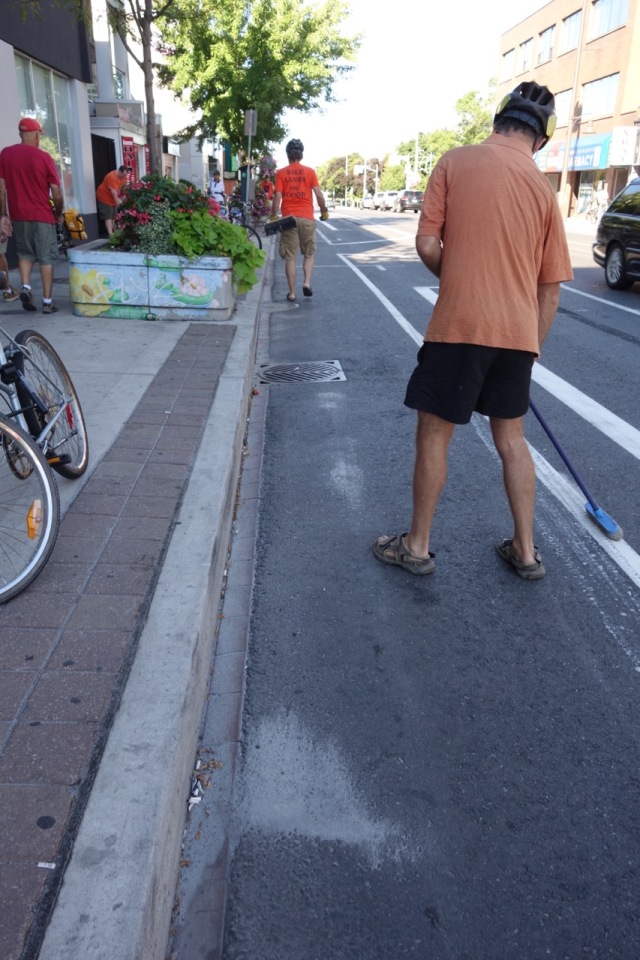 We were visited by this little gal. It’s many years since I’ve seen a preying mantis in town. (photo: Wayne Scott)

She started fading so she got a lift.

The fellow to the left took some pictures of us for his bike blog. He was from Amsterdam, and we struck up a nice discussion. The fellow to the right was strongly opposed to the bike lanes due to the potential hazard of being doored from the right. Hopefully, once the installation is complete and everyone gets used to the lanes, everything will be fine.

In front of Lee’s Palace.

Sweeping glass off another intersection. 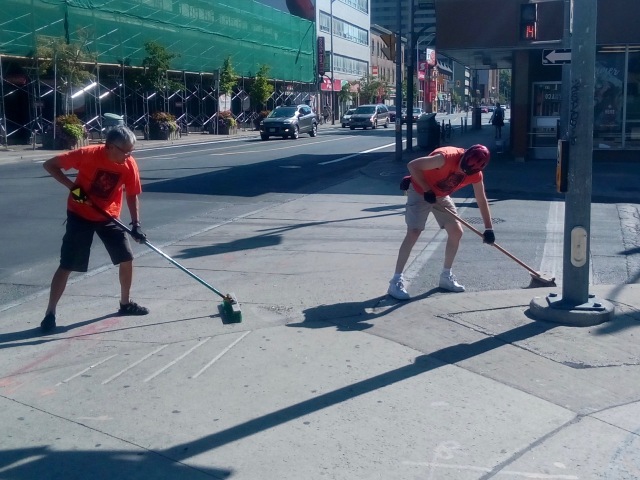 Hopefully once the signage is changed, fewer people will park in the bike lanes.

Here’s the whole crew at the end of our session. From left to right: Dave, Albert, Andy, Wayne, (Elise napping) and Jun.

We are very grateful to all the people at the city who have worked hard to make this project happen. We got plenty of positive feedback from pedestrians and cyclists as we were working. It is  clear that the community is very excited about this project.

Albert received these updates from Jacquelyn Hayward Gulati: “installation of left turn arrows, hatching in the buffer and symbols will recommence tonight and continue nightly.  Staff will continue to inspect and address excess beads from the installation of markings. The changeover of signs is underway and will continue this week, which should clear up the confusion.”