Posted on December 3, 2015 by bellsonbloor

Today there was a public consultation in the latest step on the long march towards bike lanes on Bloor. The short term objective here is to get a pilot project approved for bike lanes between Shaw and Avenue. Pulling up to the event, I see a familiar face, long time activist Hamish, handing out leaflets at the front door.

I was there right after 4 pm since I had other engagements later in the afternoon. so I expected that it would not be crowded. I was wrong. There is obviously a lot of interest in this issue.

Ward 20 Councillor Joe Cressy has been solidly behind the effort to get bike lanes on Bloor in his ward. Here he is with Tammy Thorne (editor in chief of Dandyhorse) and Albert Koehl.

In addition to the panels around the room, there were detailed drawings laid out on long tables.

The objective of this public consultation was to choose between three options for the bike lane pilot. Option A involves the total removal of parking on both sides of the street, and was not presented as a serious option. This left option B, which has curbside parking on one side and bike lanes on both sides of the street adjacent to traffic, and option C, which has the bike lanes next to the curb and protected from traffic with a line of parked cars, where this is possible.

I’ve shamelessly copied some of the panels from the city, which have all been posted here.

This panel shows the existing situation in two sections, east and west of Spadina, with the road being narrower on the western section. There is enough road width on the eastern section for protected bike lanes in both directions. 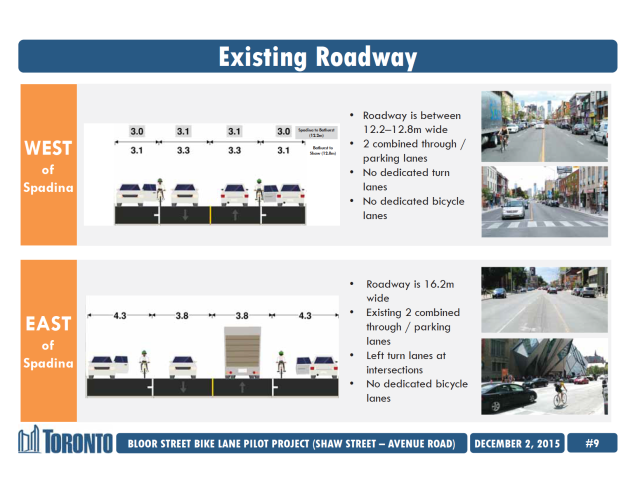 This panel shows Option C, where the bike lanes are protected by parked cars.

This is a detail from one of the maps on the long tables, showing how option C would look near Bathurst, with details such as the accommodation of right turn lanes for cars. It also inventories parking and shows the number of parking spaces to be lost, which is roughly half in the western section. Along the eastern section, the number of parking spaces would almost be the same as the existing situation.

These 3D renderings show the difference between options B & C, where basically the position of parked cars and the bike lanes have been swapped.

One additional consideration in the removal of parking is whether to remove it all along one side, or to alternate it from block to block. Alternation would be fairer to merchants on both sides, but would induce a little zigzagging of the bike lanes.

I was not able to stay for the presentations, but I assume that the consensus of the cyclists present would show a preference for option C, with allowances for alternating parking. I do not know how many people opposed to the bike lanes would show up.

This panel describes next steps.

I was told that after this meeting, the design consistent with the preferences expressed would be refined. At that point, there would have to be another public consultation (perhaps in February), and the final proposal would not go to PWIC until their April meeting. If the pilot is approved by PWIC, then it has to go to council. Therefore, even if things go smoothly, the earliest that the pilot could happen is sometime in the summer.

It is certainly not a given that the pilot will be approved. Although a report containing an outline of bike infrastructure projects proposed for 2016 was approved by PWIC in September, it was passed to council only for information. Any bike lane installation that affects on street parking must still be approved by PWIC and then council, and the Bloor bike lane pilot is certainly the highest profile project on top for 2016, and is probably the most controversial. We will need plenty of support from the bike community to see this process through.

At this point in time, you can express your opinions about the different design options on a survey that is available at this city website, the same place where you can view all of the detailed information presented at today’s meeting.